We’re living in the age of nanotechnology. Hidden spy cameras these days are so small that they can be planted anywhere by anyone. They can be installed in the door peephole, in a seemingly innocent pen, and even in the bathrooms!

Are you sure that no one is spying on you? Can you be certain?

The answer is, you can’t! Not unless you have a hidden camera detector in your possession.

And that’s what brings us to this article. In this day and age, it’s crucial that you should purchase a bug detector so you can make sure your home is not being spied on.

There are a number of different methods of finding hidden cameras. You can inspect all the lights and sockets in your house, look for hidden wires, etc. However, all of that requires backbreaking work and you can still never be sure.

The only way to be certain is to install a spy camera detector.

In this article, we’ll give you an overview of the 10 best hidden camera detectors in the market. We have personally examined all of these bug detectors, did lots of research and compared their features to offer you the best selection. 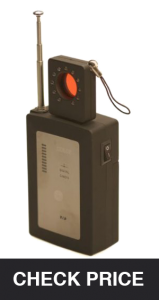 The Sleauthgear Law-Grade Counter Surveillance PRO Sweep is the Editor’s Pick for the best hidden camera detector because it’s hands-down the best in the industry. It’s a handheld bug detector you can use to sweep your entire house and find any surveillance device that might have been planted there.

It has all the bug detector features you could possibly ask for, has the highest range of frequencies known to spy camera detectors, AND it can be handled by a 2 year old! Literally!

All you have to do is press the button and start sweeping the premises. A red light will flash away from you, that’s completely normal. You have to look through the View Finder Circle. If you notice a red light flashing back at you, that just means you’ve found a hidden bug!

I can’t recommend this product highly enough. I once swept a hotel room with it and found TWO hidden bugs! The management got an earful from me.

The Sleauthgear Law-Grade Counter Surveillance PRO bug detector find surveillance equipment by sweeping for frequencies. As such, you should turn off all electronic equipments when you’re sweeping, including the WiFi and router. These devices would otherwise interfere with the signals and you’ll get a distorted reading.

Okay, I’ve got to be honest, I’m not too keen on gadgets that come with super long instruction manuals that can only be handled by tech experts. All electronic devices should be user-friendly, above all else.

And that’s EXACTLY why this is my #1 choice. 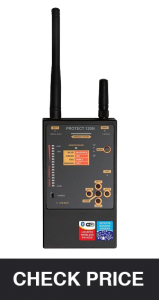 The Spy-MAX Security Products Professional Digital RF Detector is the perfect hidden camera detector as it has the ability to detect all modern hidden bugs that use Bluetooth or Wi-Fi protocols.

It’s currently one of the most advanced (and expensive) bug detectors, and should only be used by people who need serious anti-surveillance gadgets.

This is definitely the MOST advanced and powerful bug detector in the market. It’s advanced, comes with great features, and can detect a range of different signals. This is the kind of product that’s used by professionals in corporate settings and in other areas wherein the chance of high-end surveillance is more likely. However, it’s really expensive and difficult to operate, so I wouldn’t recommend it to the regular Jo. 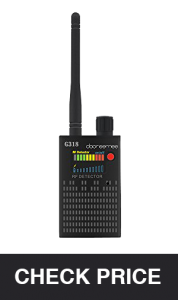 The Dooreemee Super Anti-Spy Camera Detector is our Budget Pick for the best hidden camera detectors in the market because it packs a wide range of features while still being easy on the pockets.

Its cheap price and user-friendliness are the reasons why this is one of the most popular bug detectors out there.

This is solely a radio wave detection instrument. As such, it cannot do some of the things that the other bug detectors can do. For example, it can’t detect either video or audio recording devices because the voice recorders and DV can’t pass the signal. However, it works perfectly on hidden spy cameras.

If you’re a regular person concerned about your privacy being invaded, you can use this hidden camera detector. It’s not the most powerful device in the market. But it can easily detect cameras, and it has a graphic LED display that shows you how far you are from the spy gadget. Plus, it’s incredibly cheap! 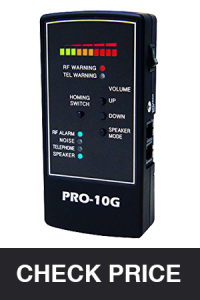 The Spy-Hawk Security Products Pro-10G is one of the most popular law-grade counter-surveillance bug detector in the market.

It has recently been upgraded with advanced features and the ability to detect modern spy cameras.

Furthermore, it’s highly reliable because it’s used by law enforcement agents from around the world.

What makes it reliable?

All of these features render this device into the ideal device for law-enforcement agencies. However, you have to be mindful about one thing. The wide frequency range can be both a blessing and a curse.

On the one hand, it can pick up signals from even the most discreet spy cameras. However, because of the wide frequency, it also picks up interference from flashing lights, electronic gadgets, etc.

As such, you need to turn off all the electronic devices in the vicinity for it to function properly. 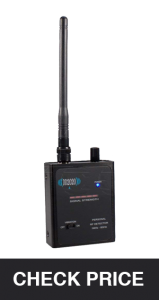 The KJB DD2020 is the best RF bug detector in the market. It’s an extremely small device that you can easily hide in your pocket, yet it’s powerful enough to pick up on all RF bugs and hidden cameras.

What makes it special 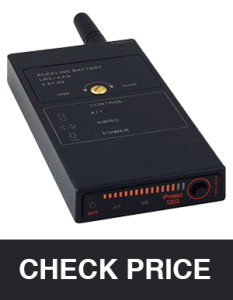 It informs the user of the presence of bugs either through vibrations or through a bar graph indicator. It’s completely silent. 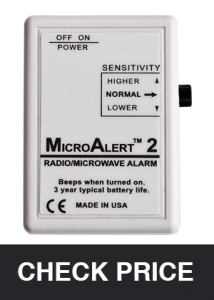 The best aspect of the Micro Alert 2 bug detector is that it’s pocket-sized and extremely reasonable.

It can’t be used for advanced counter-surveillance purposes, but it’s good enough for home use. 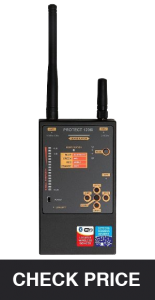 It comes with two antennae.

The first has a frequency range of 40MHz to 4 GHz, and the second has a 2.44 GHz frequency.

As such, it can differentiate between different types of signals and devices, lowering the possibility of interference.

It works on 2xAAA batteries and has a lifespan of 20 hours. 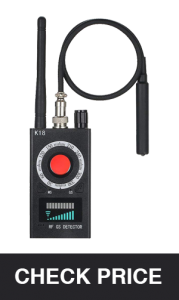 It comes with both sound and light indicators based on which you can determine how close you are to the surveillance equipment.

As such, even if they are currently inactive, you can still find them. 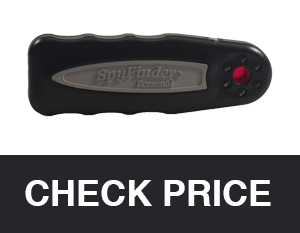 The Spy Finder is an expensive and powerful device that can locate the source of hidden cameras, both wired and wireless.

Unlike the other devices in this list which can be used for a range of functions, this Spy Finder can ONLY be used as a camera detector.

So now you know all about the 10 best hidden camera detectors that can help you find hidden spy cameras.

For this article, we’ve given you with a range of options. Some of these bug detectors are professionally used by law-enforcement, and some are just meant for home use. Some are difficult to operate, and some can be used by 2-year-olds. It finally comes down on what your needs are and who you believe is spying on you.

If you have any questions regarding the type of hidden camera detector that you should use, feel free to mention it down in the comments section!