There are a lot of benefits of using night vision spy cameras in your business, office, home, etc. The biggest advantage is that it helps you catch crooks and potential intruders. Most people go about their thievery under the cover of darkness. However, a night vision spy camera is the best way to pull them out into the light, expose them, and keep yourself and your property safe.

In this world that is riddled with crimes, using a hidden spy camera is of crucial importance. People use a range of different types of cameras such as a motion detector camera, a discreet mini spy camera, wearable body cameras, and cameras disguised as ordinary objects like pens or clocks.

While all of them have their unique advantages, none of them can help you keep yourself safe at night. That’s why it’s so important to get a good night spy camera. And that’s exactly what we’re here for.

Even within night light spy cameras, there are a lot of factors to take into consideration. You have to consider whether it provides visuals in that dreaded green light, black and white, or color; you have to consider its field of vision; and many other factors. The search can honestly be overwhelming.

In this article, we’ve listed out the 10 best night vision spy cameras in 2019. The list has been compiled based off a thorough vetting process, and after consultation with reputable security firms.

So read on to find out about the 10 best night vision spy cameras of 2019. 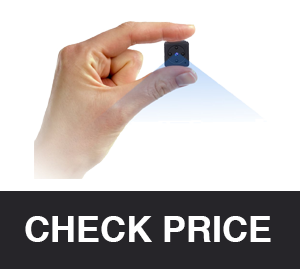 The NIYPS Night Vision Spy Hidden Camera is one of the most discreet, reaosnbale, and powerful night vision spy cameras in the market. That’s why we’ve chosen this as our Editor’s Pick.

It looks like a little 1 cubic inch magnetic dice and it weighs just 3.2 ounces. As such, it can be hidden away anywhere at all. You can attach it to light fixtures, poles, tables, anywhere at all. Because of the size, no one will even notice that it’s there.

In terms of Night Vision, this spy camera comes with 4 infrared LED lights that allow you to see in low lighting. 4pcs IR LED light isn’t optimal, but it’s still pretty powerful. The LED light doesn’t glow when being used, so you can rest assured that it remains discreet.

The NIYPS Night Vision Spy Hidden Camera is my #1 choice for the best night vision spy cameras because it’s highly portable, discreet, and has an effective Night Vision feature.

However, one of the most understated and important reasons for this being my top choice is that it comes from a highly reputable and reliable company – NIYPS. Later in this article, you’ll also find products that are cheaper, or products that are more discreet, or products with 8 IR LED lights. But this product has a combination of all the qualities and it’s trustworthy.

This spy camera also featured in our list of Best Mini Spy Cameras for Bathrooms.

The MCSTREE Night Vision Hidden Camera is concealed within a digital alarm clock. As such, it’s useful for two purposes – you can keep it in your own bedroom so you can catch a thief if they enter, or you can gift it to someone you want to spy on.

In both these cases, the MCSTREE Night Vision Hidden Camera is extremely effective. It has a powerful night vision with 6 infrared LED lights so it will help you see what’s going on in the entire bedroom at night.

Furthermore, because it looks like a harmless alarm clock, it will be positioned in the ideal vantage point beside the bed and no one will suspect it. The lens itself is located at the corner of the display screen. It merges well with the black surrounding so it can’t be seen by the naked eye.

I personally love spy cameras that can be hidden in plain sight. And MCSTREE Night Vision Hidden Camera is one such camera. You can place it on your bedside table and if someone intrudes, they’ll be caught on camera. You can also give it as a gift to someone you really want to spy on, and when they place it beside their bed, you have access to them.

However, it has one major limitation. You can’t use it to spy on someone else unless they have accepted this clock as a gift. And I think we can all agree that we can’t just gift a clock to ANYONE and ANYTIME. You can only do so to someone you know personally.

Other than that, this night vision spy camera is really effective and has great features. It also featured in our list of the Best Alarm Clock Spy Cameras. 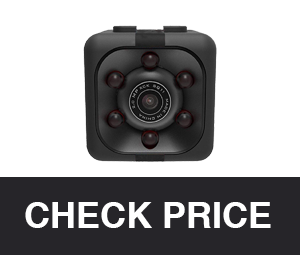 It has 4 infrared LED lights with which it provides enough visibility in recordings for you to be able to look around an entire room in the dark. Whit it’s a fairly basic night vision, it’s effective for small spaces like rooms, bathrooms, etc.

Like NIYPS Night Vision Spy Hidden Camera, this spy camera also looks like a 1 cubic inch black magnetic dice. It can be attached to any metallic object and hidden discreetly in a manner that no one can find it. This also make it one of the best spy cameras for home.

The Rozetka Spy Camera with Night Vision is extremely similar to NIYPS Night Vision Spy Hidden Camera in appearance, features, video quality, etc. Both of them are basically the same product. However, the reason that this scores in #3 and that scores in #1 is because this Rozetka Spy Camera has terrible Amazon Reviews. It has no 5-star ratings, and a whole series of customers complaining that the product is riddled with glitches. 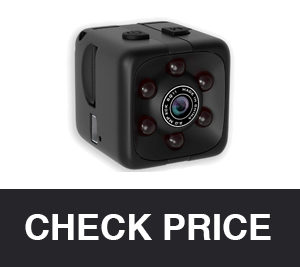 The M MORVELLI Spy Hidden Camera with Night Vision looks a lot like the Rozetka Spy Camera. It’s yet another 1 cubic inch magnetic black dice that can easily be concealed or attached anywhere at all.

In terms of Night Vision, however, it’s better than any of the previously mentioned spy cameras. It has 8 infrared LED lights which ensures fantastic quality of recordings and field of vision even at night. 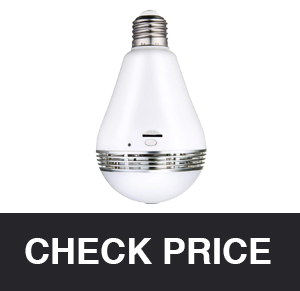 The MECO Hidden Bulb Night Vision Camera is quite a unique night vision camera. It’s disguised in the form of a light bulb, and the camera lens is located at the bottom of the bulb. This camera is supposed to be attached to the ceiling. As such, it provides a complete 360°

panoramic view of the room and no one will suspect they’re being watched.

The Night Vision feature is extremely powerful and provides a visual radius of up to 25 feet in complete darkness. That’s more than enough to get a visual on the entire room. This product also featured prominently in our list of Best Light Bulb Cameras in 2019. 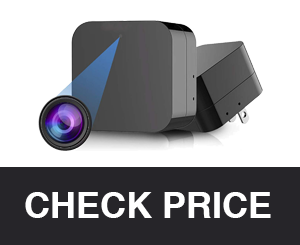 The Spy-See Hidden Spy Camera is an extremely discreet night vision camera concealed within what looks like an ordinary wall charger. The Night Vision feature can capture images within a 20 feet radius of vision. So it can be installed in small rooms and bathrooms. The camera lens lies on the back of the charger. As such, you can connect it in a socket where it would have the best vantage point and then allow it to record everything secretly. 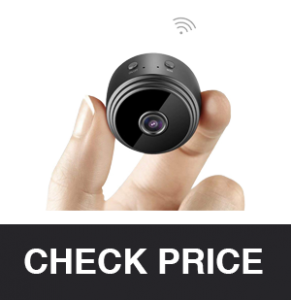 The aobo Mini Spy Camera Night Vision isn’t the most discrete night vision spy camera in the market. It looks sleek with its spherical appearance. However, it weighs 7 ounces and has dimensions of 5.6 x 3.6 x 1.7 inches, which makes it extremely visible. Furthermore, it’s not concealed within an ordinary seeming object and clearly LOOKS like a camera. It has 6 inbuilt infrared LED lights that can provide up to 5 meters of vision during the night. 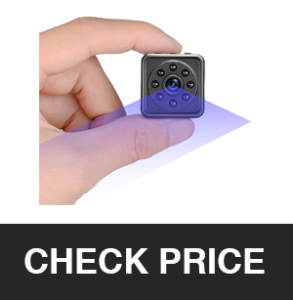 The SOOSPY Spy Hidden Camera with Night Vision also featured in our list of Best Outdoor Hidden Security Cameras with Night Vision. Similar to many of the other spy cameras in this list, it’s a small magnetic black cube that can be attached to any object.

It records 1080p videos at 30 frames per second with a 140 degree wide-angle lens. The Motion Detection feature ensures that you’re notified of any movements via a free downloadable iOS or Android app. And it has 8 infrared LED lights for enhanced visibility in the dark. 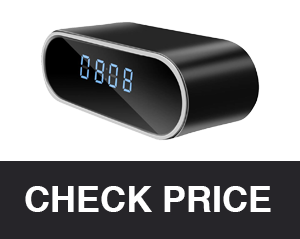 It records 1080p videos both during the day and night. The 2000 mA rechargeable battery ensures that it can record videos for a long time before needing to be charged. And if you use the motion detection feature, then videos will only be recorded when some motion is detected, simultaneously saving storage space and enhancing battery life. 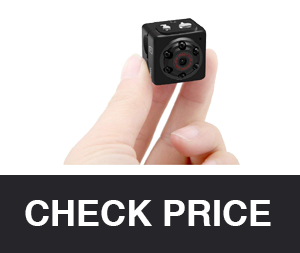 The ieleacc Night Vision Hidden Spy Camera is a tiny 1 ounce magnetic dice that can record videos in 720p or 1080p resolutions, depending on the setting you enter in the mobile app. The viewing angle is pretty wide at 140 degrees. It can also take pictures in a 4:3 resolution. This spy camera can also record clear HD videos in low lighting.

It has a lot of similar features as some of the other night vision spy cameras in this list, but it comes so low in the list because it’s a new product and not highly reliable.

All of the products mentioned in this list have been thoroughly vetted by trained security and surveillance experts so you can trust their judgment.

If you have any questions regarding which night vision video camera would suit your needs specifically, feel free to mention it down in the comments section.