Are you looking for the best spy camera that can be concealed within an ordinary item? If so, you should consider buying a keychain camera.

When it comes to discreet camera, you have a lot of options such as a picture frame hidden camera, a button camera, and many more. However, a keychain camera is one of the most effective concealed cameras in the market.

It looks like an ordinary keychain so you can carry it anywhere you want. You can even hang it around your neck so that it records everything you see and hear.

In this article, we’ll give you an overview of the best keychain spy cameras in the market. All of the products we recommend have been personally tested and we’ve only selected them after consulting with several surveillance experts and security firms.

So without further ado, these are the 10 Best Keychain Spy Cameras in 2018. 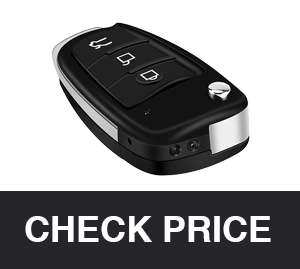 The FRCAMI Car Key Chain Spy Camera is an extremely cheap keychain camera, which is why it’s our Budget Pick for the best keychain spy cameras of 2018. It’s a completely functional car keychain camera that you can also use for security and surveillance in your home or office. It’s made of quality-grade material and is extremely soft to the touch.

Most people seem to be under the assumption that spy cameras or surveillance equipment are extremely expensive. FRCAMI Car Key Chain Spy Camera proves that that’s not true. It’s a powerful and efficient car keychain spy camera that records videos with extreme clarity and has a range of impressive features such as Night Vision and Motion Detection at a low price point.

The reason it places in #2 and not in #1 is because it’s extremely expensive and thus only accessible to a few people. It looks like an actual car keychain and it comes with a free PV Cam Viewer which can be downloaded from Apple or Google store.

LawMate Key Chain Camera doesn’t have an impressive range of features. There are much cheaper keychain cameras that also include Motion Detection and Night Vision features. However, this is a reliable tool and its recording capacities are so powerful that it’s used by private investigators and security firms around the world. Furthermore, it has WiFi capability so you can control it remotely. 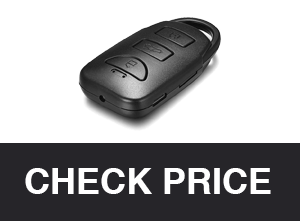 The Mofek Hidden Camera Keychain is our Best Value Pick for the best keychain spy cameras of 2018 because it’s powerful, has great features, and is still one of the cheapest products. It looks like a regular glossy black car key so no one would suspect that it’s a hidden camera.

The Mofek Hidden Camera Keychain is our Best Value pick for the best keychain spy cameras of 2018 because it records extremely sharp videos and saves them into an SD card even though it’s quite cheap. However, it doesn’t have advanced features like Motion Detection and Night Vision.

fannuoyi Keychain Camera 1080p is an extremely cheap keychain spy camera known primarily for the fact that it has a wider viewing angle than most other keychain cameras. As such, it can record a wider field of depth, giving you a more expansive look at the view. The camera is quite small and looks like a keychain. However, the camera lens pokes out of the corner of the device and you can clearly see the USB slot. As such, it’s not as discreet as the keychain cameras mentioned previously. 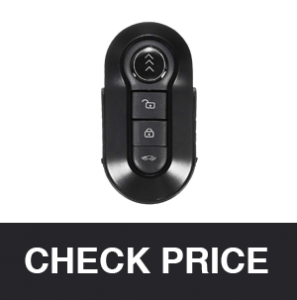 The Bysameyee Mini Keychain Camera Hidden Recorder is a keychain camera made of solid steel and it looks just like a car keychain. The body is metallic and glossy and it gives no indication that it might be a spy camera. It’s also quite cheap and has some great features. 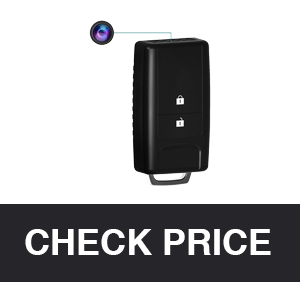 Conbrov Keychain Body Camera is quite a powerful keychain camera that comes at a low price range. The camera lens is located inside the plastic grill at the bottom of the keychain. As such, it’s completely invisible. 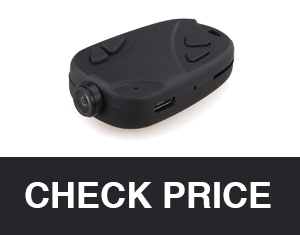 The MATECam Mini Keychain Camera 1080P has a decent recording quality. But it’s a fairly basic device. Furthermore, the camera lens is easily visible, and so is the USB port, so it’s not very discreet.

Fuvision Hidden Camera Keychain records date and time stamped videos in 1080p quality and can save them in an SD card of up to 128GB space.

Motion Detection is enabled so only the most vital footage is captured when movement is noted.

And it has a battery that can record up to 80 minutes of footage for every charge. 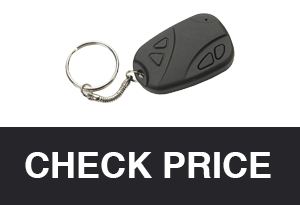 It’s extremely thin and lightweight, looks just like an actual keychain, and it also happens to be the cheapest keychain camera in the market. 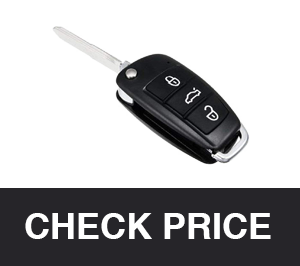 honsda 1080P Mini Car Key Chain Camera is a powerful keychain spy camera with the ability to record 1080p videos at 30 frames per second, along with Motion Detection and Night Vision features. It’s also quite reasonable.

However, we’re placing it at the bottom of this list because it’s an extremely new product so it has not been used by a lot of customers yet and thus is not very reliable.

That’s all you need to know about the best keychain spy cameras in the market. As you can see, some of the keychain cameras are cheap, some are expensive, and they have different sets of features. However, they are all functional and work well, we’ve ensured that by consulting several surveillance experts and security firms.

Now the decision is in your hands. You need to go through them and find out which ones of them are vital to your needs. If you have any questions, or if you need any help selecting, feel free to comment down below and we’ll get back to you with an answer!