You get hidden cameras with other objects as well such as glasses and shirt buttons. But photo frame hidden cameras are the best because they look like innocent family photos so no one suspects them.

You can place them in your office, bedroom, living room or wherever, positioned in a way that they have a view of the whole room. If an intruder comes in, you’ll be able to catch them red handed on tape.

However, there are a lot of different spy photo cameras out there, some of which aren’t exactly very reliable. That’s why we personally tested and vetted dozens of the leading picture frame hidden cameras to create this definitive list of the 10 best spy photo frame cameras of 2019. All of the recommendations in this article have also been personally affirmed by reputed security firms and surveillance experts. 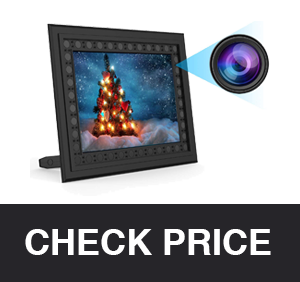 The Conbrov 720P Photo Frame Hidden Spy Camera is one of the best spy photo frame cameras in the market. The lens is built into the frame so that it gets concealed around the engravings and color of the frame. As such, it’s completely non-detectable. It has a built-in stand and a hole so you can place it upright on a table or hang it in your drawing room or bedroom. It makes for great decoration, while also providing security.

When it comes to buying any type of hidden spy camera, one of the most important factors is to see how reliable and trustworthy the brand is. In this case, Conbrov is an extremely reputable company that’s trusted by over 50,000 different homes and offices around the world. They’re an industry leader in surveillance equipment, which is why this product ranks in #1.

In addition to the brand quality, this picture frame hidden camera also delivers. It records extremely clear high definition videos and has a series of advanced features such as Night Vision and Motion Detection. Finally, it has one of the most powerful batteries amongst spy cameras. 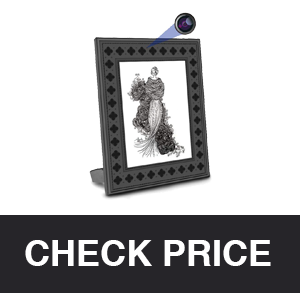 The BSTCAM Photo Frame Hidden Wireless Camera is yet another extremely powerful picture frame camera that’s discreet and can either be mounted on a table or hung up on a wall. The camera lens lies within one of the patterns on the picture frame. The patterns are designed in such a way that they perfectly conceal the lens and you wouldn’t be able to see it even if you tried. Furthermore, it’s also WiFi enabled so you can control it remotely via a YIEYE mobile app.

The BSTCAM Photo Frame Hidden Wireless Camera ranks in the #2 position in this list for a lot of the same reasons as Conbrov. To be honest, they are both so good that they can basically switch positions and it would be the same.

While BSTCAM is also a great brand, it’s not nearly as well reputed as Conbrov. However, this picture frame camera is completely wireless and it transmits visuals to a mobile app, a feature that’s lacking in the Conbrov camera.

As such, you have to decide which is more precious to you — brand name, or mobile compatibility?

Beside that, BSTCAM Photo Frame Hidden Wireless Camera records clear videos in both day and night, has great motion detector sensors, and one of the best batteries amongst spy cameras. 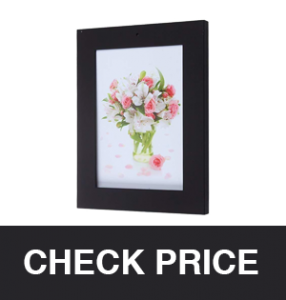 The Mengshen Home Photo Frame Style Hidden Camera is our Budget Pick for the best spy photo cameras of 2019. It’s extremely cheap and can be bought by just about anyone. Unlike the previous picture frames, this one is fairly basic in aesthetic. It’s a simple black frame without any engravings or graphics.

The camera lens lies within a tiny hole at the top of the frame. If you look close enough, the lens hole can be seen, but it’s still pretty discreet. It has both a wall hook and a frame stand so you can mount it on a table or hang it on a wall.

The previous picture frame cameras in this list are meant for advanced users and are too expensive for most people to buy. That’s why we’ve introduced Mengshen Home Photo Frame Style Hidden Camera in the #3 position. It records clear HD videos and has Motion Detection feature. And it’s available at an extremely low price point so people from any economic background can buy it.

One of the biggest issues with this camera is that it has an extremely weak battery. As such, you’ll have to constantly keep charging it. 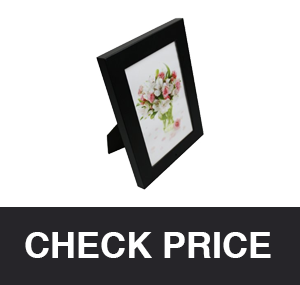 YYCAMUS Picture Frame Hidden Spy Camera is a discreet spy camera located within a fairly basic black picture frame. Like the Mengshen picture frame camera, this too has extremely basic features and is meant for people on a tight budget. The picture frame itself is 20×15 cms in dimensions and has both a wall hook and a frame stand so it can be hung on a wall or placed on a table. The control buttons lie at the back of the frame. You have  T-Flash card slot, a USB slot, a video recording button, an On/Off button, and an LED light for status indication. 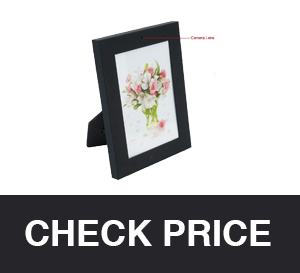 The Libest Photo Frame Hidden Camera is a spy camera concealed within a simple black frame. The hole for the lens is at the top of the frame. It’s generally hard to spot because the surrounding frame is also black.

But if someone inspects it closely, they’ll be able to see the hole. You also get a wall hook and a frame stand at the back so you can mount it any way you like.

It’s extremely easy to control with the click of the buttons at the back of the frame. 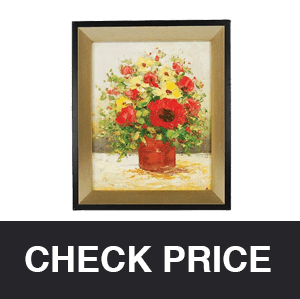 The STS Oil Painting Picture Frame Hidden Spy Camera stands out from the other photo frame spy cameras because it’s an oil painting rather than a simple picture frame. As such, you can hang it up on your wall for some artistic value as well. The frame dimensions are 12″ x 10″ x 1 3/4”. It’s also WiFi compatible so you can download a mobile app to be able to remotely access and control the camera. 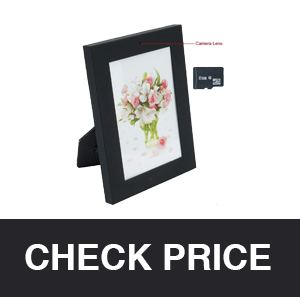 The Romhn Photo Frame Hidden Camera is a lot like other basic and cheap picture frame cameras in this list like the ones by Mengshen and Libest. Like them, this is also a simple picture frame with a lens hole at the top. The control buttons are behind the picture frame and they can controlled easily with the click of a single button. It has an inbuilt wall hook and a frame stand so you can mount it however you like. 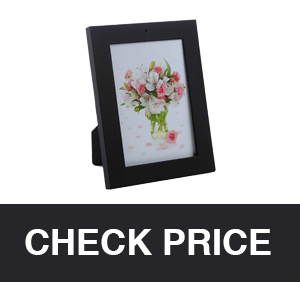 The fannuoyi Picture Frame Hidden Nanny Spy Camera is a black picture frame with a tiny hole on top through which the lens can record 480p videos at 30 frames per second. It’s extremely portable and it can be placed in anyone’s home or office. It has a built-in lithium battery that can provide a maximum of 1 hour recording footage. And it supports a T-Flash card of up to 16GB.

It also has Motion Recording feature so it can conserve battery life and storage space and record videos only when there’s some movement. 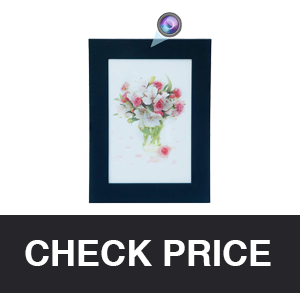 Elite ETSPY Photo Frame Mini Hidden Spy Camera is a simple black photo frame with a camera lens at the top of the frame. The hole for the lens is extremely small and it can pass undetected by most people. It records HD videos in 960p at 30 frames per second. The USB slot lies behind the camera and it can be used for charging the camera or for connecting it to the computer so you can go over all of the recorded data. It can accommodate a micro SD card of up to 32GB, however, it doesn’t come with the product and has to be bought separately. The battery life is pretty weak, however, it can be extended by triggering the Motion Detection so it only records when there’s some movement. 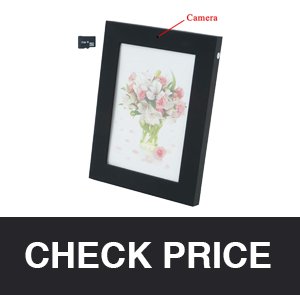 YADACAM 960P HD Photo Frame Hidden Spy Camera is one of the cheapest picture frame cameras in the market. It can record 960p videos at 30 frames per second with the hidden lens on top of the picture frame.

One of the reasons this picture frame hidden camera is so cheap is because it doesn’t have any additional features, not even motion detection.

As such, you have to start video recording manually and then stop it when the storage space has run out. It supports a maximum storage space of up to 32GB.

So now you know all about the best spy photo frame cameras in the market right now. Some of these photo frame cameras are extremely advanced with features like Motion Detection, Night Vision, and Loop Recording. However, some of them are fairly basic. The two different grades of spy cameras differ greatly in their cost. As such, you have to decide what your specific needs are and how much you’re willing to shell out for a spy camera.

If you need any assistance in choosing the right picture frame spy camera for YOUR specific needs, feel free to mention it down in the comments section. We’d love to help!