Hidden cameras come in various different forms – picture frames, spy pens, etc. However, a smoke detector camera is one of the most discreet hidden cameras in the market.

A smoke detector hidden camera is installed on the ceiling so it’s pretty much impossible that someone would inspect it closely enough to locate the camera lens. Furthermore, because of its angle, it’s ideally placed to watch over the whole room without any blind spots. 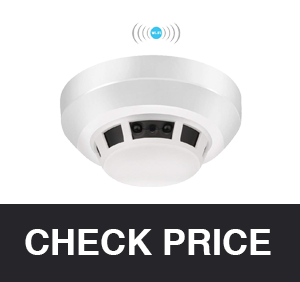 The Heymoko Wi-Fi Smoke Detector Camera is the best smoke detector hidden camera in the market, by a long shot. It’s a sleek and stylish smoke detector that can be attached to the ceiling and it’s lined with a series of black frames.

The camera lens is located within one of those black frames, making it completely discreet. The lens is angled in such a way that it can capture the entire room without any blind spots. Furthermore, it’s also WiFi enabled so you can control it and watch live footage from your smart phone.

What makes it so popular

Heymoko Wi-Fi Smoke Detector Camera is my #1 choice because it is absolutely flawless. It records extremely sharp videos both during the day AND night, can record either in continuous mode or motion detection mode, and it can be controlled remotely via an app! It leaves absolutely nothing out, and it’s still reasonable enough for most people to be able to afford it. With all of these factors taken into consideration, it’s obvious why we chose Heymoko as our Editor’s Pick. 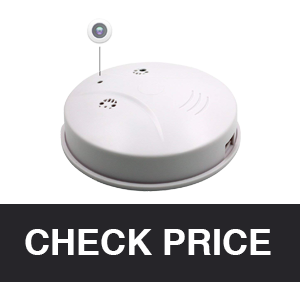 The camera lens is located at one end of the device. Even though the black lens is plainly visible against the white body, it can easily be masked as an air vent from a distance. This smoke detector camera is also WiFi enabled so you can monitor the camera from anywhere at all using the mobile app.

Sunsome Hidden Spy Camera Smoke Detector is almost as powerful as Heymoko Wi-Fi Smoke Detector Camera. However, “almost” is the keyword here. Both of them cost the same, are discreet, and record extremely sharp 1080p videos.

The main issue here is that Sunsome doesn’t have some of the vital features that Heymoko does. For example, it doesn’t have Night Vision and it has a lower storage space. That’s why we’ve placed it in the #2 position. However, beside that, it’s a powerful and effective smoke detector camera. 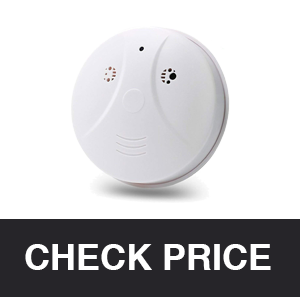 While it’s not the cheapest spy camera in the market, it’s certainly very reasonable and it still comes with some truly advanced and impressive features.

It is made of a flat white surface and the camera lens stands out prominently against the while body. However, from the distance the lens looks just like an air vent so it’s still discreet.

YUANHenry Hidden Smoke Detector Camera is an extremely powerful smoke detector camera that can be afforded by just about anyone. However, the major issue with it is that it’s not WiFi enabled so you can only control it when you’re within range of the remote control and you can’t view live footage on your phone. You have to retrieve the SD card and view the recorded footage in retrospect. It also happens to be an extremely new product, which is why there are no customer reviews to help gauge how reliable the product is or how often it’s successful. 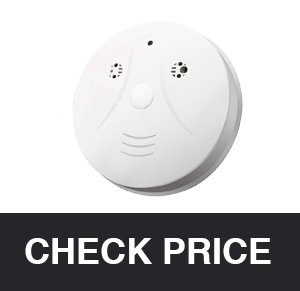 The QUANDU WiFi Smoke Detector Hidden Camera is an extremely powerful smoke detector camera with an extremely impressive range of features and capabilities.

It looks fairly basic with a white dome shape. The camera lens is located against the white body but looks just like a design element and does not raise suspicion. It’s also WiFi enabled, which means you can control it remotely and access the footage from anywhere in the world. 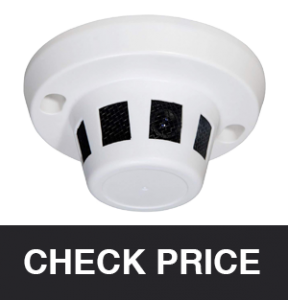 HDView Spy Hidden Camera Smoke Detector Type is similar in aesthetics to Heymoko Wi-Fi Smoke Detector Camera, however, it doesn’t have an impressive range of features. The body of the smoke detector is marked by black lateral accents and the camera lens is hidden within one of them. As such, it’s completely discreet.

Despite the lack of impressive features, the reason it’s mentioned in our #5 position is because it has received a great set of reviews from Amazon customers, which means that it’s highly reliable as a smoke detector hidden camera. 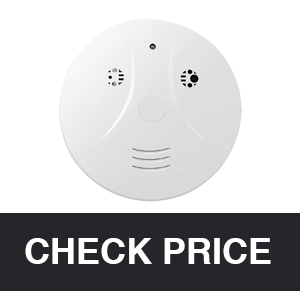 However, the reason it places so low in this list is because the brand isn’t highly reputed and we place a high regard on strong reputable brands. In terms of aesthetics, it’s a disc-shaped white smoke detector with the camera lens located at its head. 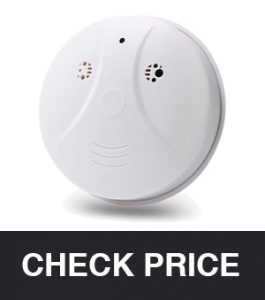 Tangmi Mini Smoke Detector Cam HD 1080P is a newly created smoke detector alarm that has a wide range of features and is WiFi enabled. It records sharp videos and is extremely discreet, made in a similar style as Sunsome Hidden Spy Camera Smoke Detector.

It passed through all of out tests and evaluations as well. However, since it’s a new product, there isn’t a lot of customer reviews to calculate its overall success rate, making it slightly less reliable than the other products in this article. 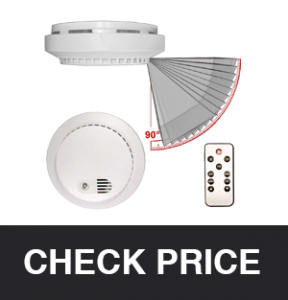 PalmVID Smoke Detector Hidden Spy Camera is one of the most expensive smoke detector hidden cameras in this list.

It records 1080p videos with a maximum 90 degree wide-angle lens. The viewing angle can also be adjusted by the user within the 90 degree range.

The Motion Detection feature starts recording videos the moment the sensors are triggered and the videos are stored in the micro SD card. It comes with a 2-year warranty. 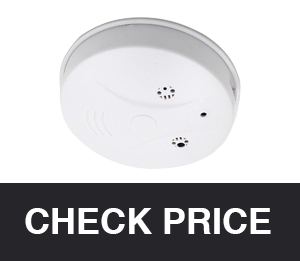 The Pelay Hidden Camera Spy Camera Smoke Detector records 1080p or 720p videos at 30 frames per second and stores them in an SD card up to 64GB in space. The Motion Detector can detect movement up to 5 meters in a straight line. It has an internal 2650 mAh battery that can record 2 hours of footage at a single charge. It’s also WiFi enabled so you can view live footage from anywhere in the world and you can trigger a wide range of functions and features remotely from your mobile phone app. 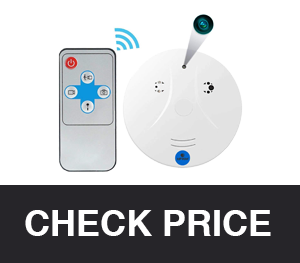 The Vipwind Hidden Camera Smoke Detector records videos in 960p resolution at 30 frames per second with a 72 degree viewing angle. It’s not WiFi enabled, but it comes with a remote control that has a range of 15 meters.

As such, you can trigger different functions such as Video Recording, Picture Taking, Motion Detection, etc from a distance.

It supports an SD card of up to 32GB, which you have to purchase and install separately. In Motion Detection mode, the battery can provide up to 12 hours of backup.

So now you know all about the 10 best smoke detector cameras in the market. We’ve compiled this list in consideration of various factors such as recording quality, motion detection, WiFi capability, Night Vision, brand name and reliability, etc. While most of the products in this list belong to long-established brands, there are some new names in here as well. However, regardless of old or new, we have tested all of these products and they’re some of the best in the market.

You can choose the smoke detector security camera which you feel is most suitable to your needs. If you need any help deciding, feel free to contact us by commenting down below and we’ll get back to you with a response as soon as possible.