Cameras can be concealed in a lot of different objects – pens, glasses, clocks, buttons, keychains, etc. Using a hidden camera in any of these objects poses its unique advantages. For example, hiding a camera in a wearing glass helps you spy on meetings and events, hiding it in a clock can help you catch intruders if they break into your bedroom.

But if you want to be able to monitor your own home and protect it from intruders, there’s no better option than a light bulb camera.

These are cameras that can be discreetly hidden in a light bulb and attached to its fixture. From the outside, it looks like a regular light bulb, but it tracks everyone’s movements. Some of these lightbulbs even come with 360 degree fisheye lenses that can provide you with a panoramic view of the room.

There are a lot of different types of light bulb security cameras in the market. They vary depending on their video resolutions, Night Vision, Motion Detection, etc. The choice can be hard.

In this article, we’ll give you a detailed overview of the 10 best light bulb cameras in 2019. All of these products have been recommended after personally vetting them and consulting with trained surveillance experts and reputable security firms.

So read on to learn about the best light bulb cameras in the market! 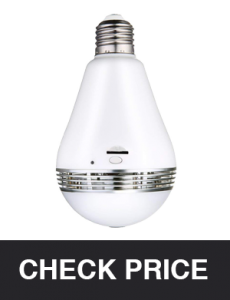 The MECO Wifi LED Bulb Security Camera is an overhead light bulb camera that can be attached to any part of your home – your front door, your living room, terrace, hallway, or even the garage.It looks like a simple functional light bulb and the camera lens is attached at the bottom of the bulb. As such, you get a complete view of the room.

Almost everything about the MECO Wifi LED Bulb Security Camera is flawless. It has a wide range of features such as Loop Recording, Motion Detection, Night Vision, 2-Way Audio, etc. Furthermore, it doesn’t leave ANY blind spots in the entire room. All of these features are extremely effective in letting you know when you have an unwanted visitor.

No matter which entrance they use, the motion detector will catch them. And then you’ll receive a notification in your phone and you’ll be able to see them even in the dark thanks to the Night Vision. Once you have the visual, you can even communicate with them via the intercom to convey any message you want.

The only issue is that you won’t be able to see the intruder’s face, not unless they look up at the camera. But beside that tiny hitch, this is the best light bulb camera in the market.

This light bulb camera also featured in our list of Best Night Vision Spy Cameras in 2019.

The issue with an overhead light bulb camera like MECO Wifi LED Bulb Security Camera is that it’s fixed in place and you can’t carry it around and place it in a position or angle that you prefer.

However, the Spy-MAX™ True Light Lamp Web Camera doesn’t have that same hangup.

This is a covert true light lamp that can be picked up by the handle and placed in any room or position you want. The pinhole camera is located in the center of the body. You can’t even see it but it can see everything YOU do, making it extremely discreet.

The Spy-MAX™ True Light Lamp Web Camera can be picked up and carried to any part of the house or any angle that you desire. As it sits there, it can discreetly record videos even when no one suspects a thing.

It doesn’t have the widest range of features, but it’s powerful because of how portable and discreet it is. While it doesn’t have Night Vision, you can simply turn on the lamp so the area is illumined anyway. 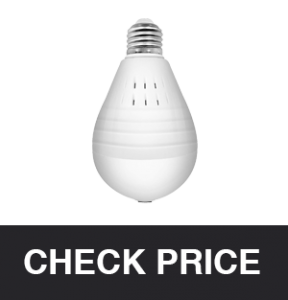 SDETER Light Bulb Hidden IP Camera is a lot like MECO Wifi LED Bulb Security Camera in a lot of different ways, but it’s a lot cheaper. It can be directly installed to the ceiling, and then you can install the app, and start monitoring with the camera!

I highly recommend SDETER Light Bulb Hidden IP Camera for all of the same reasons I recommended – MECO Wifi LED Bulb Security Camera. Both of them have extremely advanced features and are discreet. However, SDETER is a LOT cheaper than MECO, and it’s also less reputable. So it depends on what you prefer more – cheap product, or brand value? 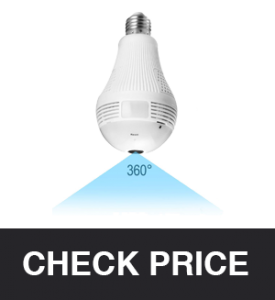 BESDERSEC Light Bulb Camera is yet another cheap overhead light bulb camera. Like the previous similar products, this one can also be connected to the WiFi and then you can control the footage, output, and the features via the phone app. 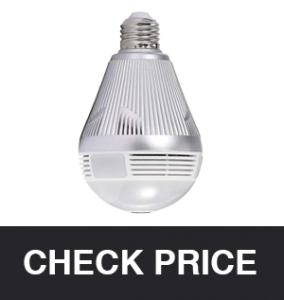 Sorobright Security Bulb Camera doesn’t come from the most reputable brand and it has pretty weak reviews on Amazon, which is why it comes so low in our list. However, if you look at the features alone, then it’s far better than even our Editor’s Pick – MECO Wifi LED Bulb Security Camera. 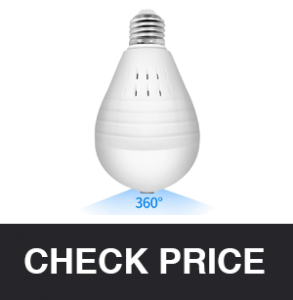 The ABAI LED Light Camera Hidden is extremely easy to use and install. You simply plug the bulb into a light fixture, activate the WiFi, download the phone app, and start monitoring! 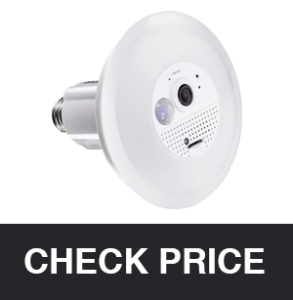 The TRENDnet Light Bulb Surveillance Camera is yet another overhead ceiling light bulb camera. However, it has a different design. This is more of a flat-disc light bulb, though it has pretty much the same features as the other products. 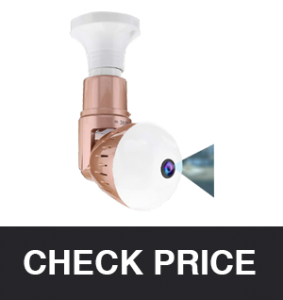 The 360 Panoramic Bulb WiFi Camera records videos in 960p resolution just like most of the other light bulb cameras in this list.

However, this camera is also rotatable by 180 degrees. It supports a maximum of 64GB SD card with Loop Recording. 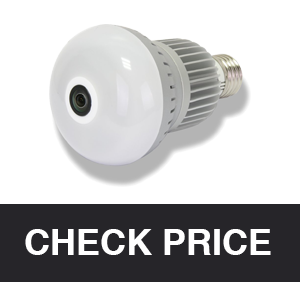 LEFTEK Security Camera With Lamp Connector records 960p videos with a 1.3 megapixel camera that has a 1/3” fisheye lens that gives you a 360 degree panoramic view of the environment.

You can use it in combination with the mobile app to control all of its features and communicate through it like a walkie-talkie.

It also has Motion Detection and Night Vision features. 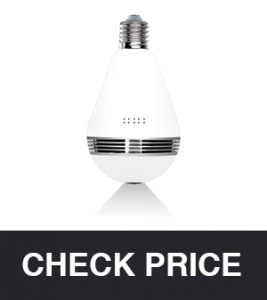 It has a 2-way intercom for easy communication, and an app that allows you to trigger features such as Motion Detection and Night Vision.

The Night Vision field of view is up to 32 feet, which is considerably lower than a lot of other similar light bulb cameras.

So now you know all about the best light bulb cameras in 2019. All of these cameras are discreet and they’re suitable for both outdoors and indoors. Furthermore, you can rely on the fact that they’re all made of superior quality because they have been assessed by professional security firms.

If you have any other questions about which LED light bulb camera to purchase, feel free to mention it down in the comments section!