Have you ever wanted to record someone without them knowing? Are you going to a meeting that you would like to secretly record on camera? Do you want to find out what someone does in their office when no one is around?

Think of it. Pen cameras don’t even need to be hidden. You can simply slip it on someone’s desk, or you can gift it to someone. They’ll think it’s just an ordinary pen, but it will record everything you need and give you all the information.

Moreover, people generally keep pens on their desks in their office. As such, it’s in the prime position to be able to record all kinds of official and useful information.

In this article, we’ve given you an overview of the 10 best spy pen cameras in the market. To compile this list, we personally tried out dozens or recording pens and vetted their features to ensure we’re recommending the very best of the best.

Read on to find out about the 10 Best Spy Pen Cameras & Recorders in the market. 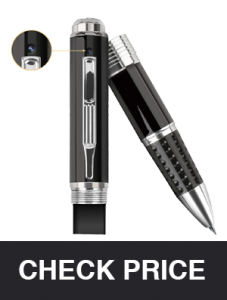 The SharpCam Spy Pen with Hidden Camera & Recorder is one of the most advanced (and reasonable) spy pen recorders in the market.

It looks extremely sleek and attractive so it can easily be gifted to someone you want to spy on. It’s reasonable, records videos in brilliant quality, and has a lot of other advanced features.

And THAT is why this SharpCam Spy Pen is my #1 choice for spy pen cameras. Not only can it record high-quality videos and pictures for an extended period, but it’s also aesthetically beautiful. It looks like the kind of pen an executive would want on their desk. As such, it’s best suited to capture the information you need.

You can also carry it to a meeting and record everything effectively. All you have to do is click the pen to make it look like you’re writing with it and voila!

This is the most classy, powerful, reasonable, AND discreet hidden camera pen in the market. 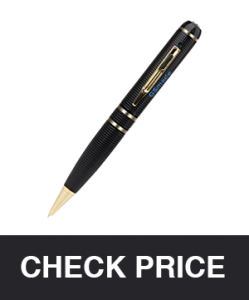 This GSmade 2K Spy Pen is the most powerful and advanced spy pen camera recorder in the market. At a reasonable price, you can record videos discreetly at 2k resolution and then view it in your computer via a USB cable.

What makes it so popular?

How to Use this Spy Pen?

This spy pen is extremely easy to operate. Most of the functions can be triggered by the button at the top.

Video RecordingTaking PicturesMotion Detection Mode
When you press the top button, the blue indicator light will turn on. When the light turns green, it means the video is being recorded. To stop recording, you have to press the button once more.
To bring the pen to Photo Mode, click the function button twice so it alternates between blue and green lights. Now press the button once more to take a picture. To return to standby mode, press the button twice more.
To enter the Motion Detection mode, click the function button four times. Repeat the same motion to exit this mode.

This is the Editor’s Choice for the best spy pen camera in the market because it’s the most powerful pen recorder. It has advanced features and the highest resolution video and pictures recording in the market. Furthermore, you can also flip between different modes.

To top it all off, it’s extremely easy to operate. You simply have to remember the number of clicks that trigger different functions. It might be slightly more expensive than some of the other pens, but if quality and aesthetic appeal are important to you, there’s no better pen camera recorder. 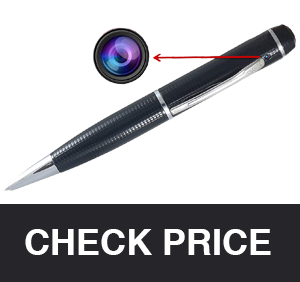 The FabQuality 1080p HD Hidden Camera Pen is our Budget Pick for the best pen cameras because it’s one of the cheapest spy pens that can record high-quality videos.

If you’re on a tight budget but you still want to record high-quality videos and pictures discreetly, then this is your best option. At just around $30, this spy pen camera can record full HD videos for several hours. The only little hiccup is that the pen isn’t as stylish as some of the other pens in this list so it doesn’t make for a good gift to someone you wish to spy on.

The LTMADE Hidden Camera Pen Recorder is an extremely powerful spy pen with an advanced set of features and 2k video recording capacities with a 20-megapixel hidden camera.

These are the main features of this pen. It’s quite similar to the GSmade 2K Spy Pen Camera & Recording Pen. Even when it comes to using the pen, you have to follow the same instructions. It’s controlled entirely based on the button at the top. 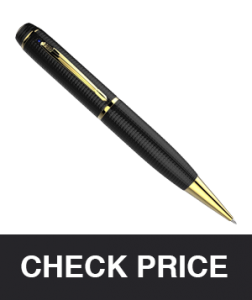 iSmartPen Pro Surveillance DVR Pen is an extremely sleek spy pen with a gold clip and finish. It’s just the type of pen that’s used by business executives around the world.

As such, it can easily fit into a corporate setting. It’s typically designed for use in harassment and investigative cases in an office setting.

In addition to its aesthetics, it also records extremely clear and crisp videos and pictures. 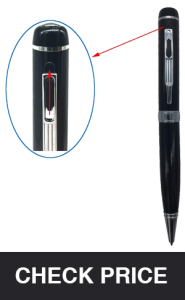 The Bysameyee Spy Camera Pen Recorder is the cheapest spy pen in the market, costing less than $30. It can record high-quality videos and the pen has 5 ink refills. 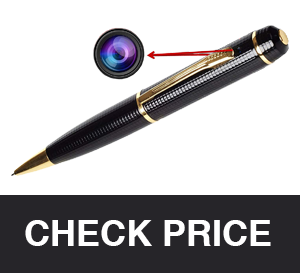 The FabQuality 1080p HD Hidden Camera Spy Pen is one of the cheapest and most effective spy pen cameras in the market. It can record videos at Full HD quality with an 8 megapixels camera. 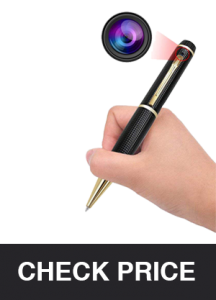 The Heruo Hidden Spy Camera Pen is a black ballpoint pen with a gold clip. The hidden camera lies just behind the clip so it’s extremely discreet.It’s also easy to carry around and you can simply hang it by your coat pockets, recording everything that you see and hear.

It comes with a 32GB memory card that can store up to 6 hours of video footage. 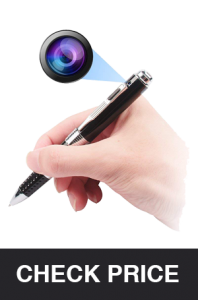 The SOOSPY Spy Pen Hidden Camera is a portable video and photo recorder that comes with 7 black refills. This pen looks like an average ballpoint pen which is why it can be used to record any activities.

It has an excellent recording quality, with a 1080p video resolution and 1920p picture resolution. Date and time stamps can also be added to the video for future reference. The built-in 200mAh lithium battery can record videos for up to 60 minutes continuously.

To start recording, you simply have to click the button at the top. Once you’ve recorded all the data you need, plug it into your USB port and access all the recorded files. It’s extremely simple to use.

Despite having such impressive features, this product has been reviewed badly be Amazon customers. Over 40% of the users have given it a 1-star rating. A lot of the users complained that it did not work, or even if it did, the picture quality was terrible. 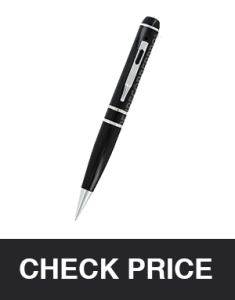 However, this spy pen camera only has 16 GBs of internal space that can’t be expanded so you can record a maximum of 3 hours of footage at one stretch.

The recording can be started by pressing the button at the top. An indicator light will flash briefly to let you know that the recording has begun. However, the camera is placed at a high angle. As such, if you slip it into your pocket, it’s likely that the camera will look over everyone’s heads, thus missing most of the action. That’s a major inconvenience in this product.

So now you know about the 10 best spy pen cameras and recorders in the market. In this list, we’ve tried to give you a nice collection of cheap and expensive pens, both full HD and ultra HD. The ultimate choice is up to you.

However, you should be warned about one thing. Just as it’s easy for you to install a spy camera on others, it’s also easy for others to spy on you! There are a lot of different methods to detect spy cameras. However, the only foolproof method is to use a hidden camera detector to sweep your entire premises for bugs. You would be wise to get one of these devices.

Having said that, get yourself a spy pen camera and never miss anything important again! If you have any other questions, feel free to mention it down in the comments section.