We live in an age of easy surveillance. Just about anyone can buy a best hidden spy camera for their homes or offices from Amazon and then install them within 5 minutes. People can also buy a range of wearable cameras concealed in ordinary items such as pens, glasses, hats, etc.

However, getting a spy watch is an extremely efficient means of spying on people. You can wear it on your wrist at all times, and thus you can spy on any event or meeting you want. Furthermore, because it’s on your wrist, most people won’t even notice a lens in it.

In this article, we’ll give you an overview of the 10 best spy watches of 2019. These include spy watches for adults AND fun spy watches for kids. All of the products mentioned in this list have been personally tested by our team of surveillance experts. And we’ve also enlisted the help of various reputed security firms to ensure we only recommend the best of the best. 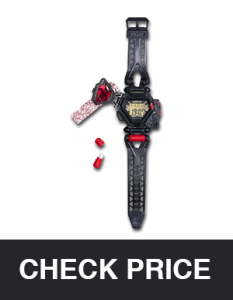 Spy Gear Field Agent Spy Watch is one of the best spy camera watches for kids in the market. It offers 8 different unique gadgets within this one product.

What makes it so popular

This is my #1 Choice for a kid’s spy watch because it comes with a range of fun features. Furthermore, this watch also comes with 2 message capsules and a secret spy paper. 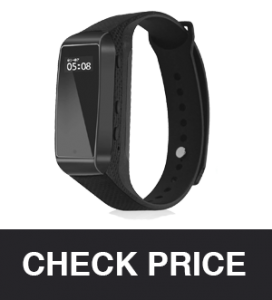 Lkcare Hidden Camera Wristband is the best spy watch for adults in the market. It’s a reasonably priced digital wristwatch that looks sleek and packs an impressive set of features. The watch screen is 2-inch long and jet-black in color, as is the wristband. The camera lens is located within the screen. Since both of them are a glossy black in color, the lens is well concealed within the screen.

Lkcare Hidden Camera Wristband is an extremely sleek and stylish wristwatch. As such, you can wear this spy camera to any event or meeting and it will look cool and effortless. Furthermore, you can trigger different functions with the click of a single button, making it ideal for espionage purposes. Yes, it doesn’t have any additional features, but it’s a great product for a cheap price that most people can afford. 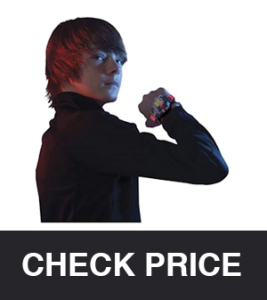 Wild Planet Spy Gear Ultimate Spy Watch is an extremely budget-friendly spy watch for kids of all ages. In addition to being an attractive watch, it has quite a range of cool features. 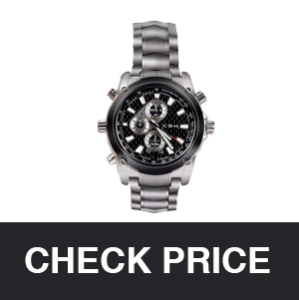 The LFHMLF Spy Security Camera Loop Video Recorder is an extremely stylish analog wristwatch. It has a metallic silver band and several different dials within the screen. The camera lens is located at the bottom of the screen and is impossible to detect. The various buttons surrounding the camera trigger different functions such as photo taking, recording, setting the time, etc. 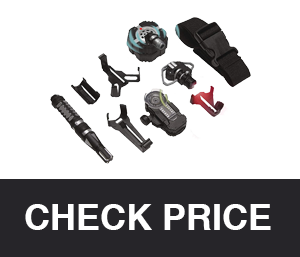 SpyX MukikiM Micro Gear Set was a Junior Spy Fan Favorite product and it won the 2015 Product of the Year awards. The entire spy gear set includes Micro Ear Light, Invisible Ink Pen, Micro Motion Alarm, Micro Listener, and a utility belt that you can attach all of it to.

This Aipinvip Smart Bracelet Hidden Camera is a budget-friendly digital spy watch that can record extremely sharp videos and sounds discreetly. It looks and functions just like Lkcare Hidden Camera Wristband. The screen is 2-inch long and the camera lens is located discreetly at its bottom. The buttons are located at the side of the frames and all of them trigger specific functions.

Miebul 16GB Wrist Smart Watch Camera is a pretty expensive but stylish analog wristwatch spy camera. The entire body of this camera is made of metal and glass and the camera lens is located at the bottom of the screen. 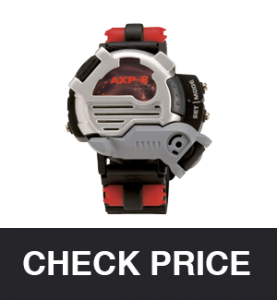 Wild Planet Spy Gear Ultimate Spy Watch is a red-strapped spy watch for kids. It includes 8 different features and functions all in a single watch.

The inbuilt motion-alarm goes off whenever it detects some sudden movement, a decoder screen can help decipher messages written with invisible ink pen, and it also features safe drop message capsules and a spy paper.

The camera also comes with night vision light for visibility in the dark. 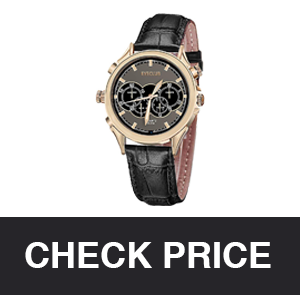 The dial is surrounded by a dull golden frame and the wristband is made of deep-brown leather.

Can record 1080p videos and take pictures in a high resolution. There are only 2 buttons so it’s easy to operate.

And it supports an SD card of up to 8GB. 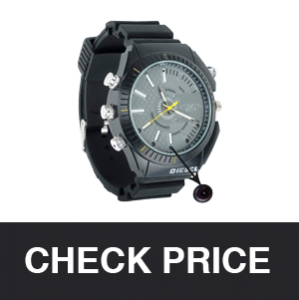 The internal battery takes 2 hours to charge and provides up to 90 minutes of backup for video recording.

You can also expand the space by adding a T-Flash card of up to 32GB.

One of the best aspects of this spy camera watch is that it comes with an infrared LED lens that provides visibility even in the dark.

I hope this article has given you a good number of options in regards to the best spy watches in the market. As you can see, we’ve given you selections from both kid’s spy watches and real surveillance watches. As such, regardless of what your purpose is, we’ve got you covered.

If you have any other questions about which spy watch is perfect for you (or your kids) specifically, feel free to mention it down in the comments section and we’ll get back to you ASAP with a response!