Before the DIY spy cameras came into existence, installing security cameras was such a task. Not many people could handle the technical aspect; they had to consult a security company to do all the work for them.

With time, DIY spy cameras began to gain popularity among many people in the world. You could move with your camera without anybody recognizing that you are spying on them. As a spy, you know how important this is.

The problem arose, however, when the hidden cameras became too familiar that it is now a problem finding the best camera for a journalist or a spy.

Nonetheless, we found one that stood out among many brands in the market, the NIYPS Mini Spy Hidden Camera. If you are looking to buy the best spy camera and you want to know more about this camera, then this article offers a comprehensive review that will create a new love for it.

What Qualifies It As A Spy Camera?

Before we go any further, it is apparent that you would want to know some of the characteristics that make the NIYPS Mini Spy Hidden Camera an excellent tool for a spy or journalist.

One, it is small and portable. I mean, it offers options of where to place it. Nobody can see it; hence, you will pass security without causing any alarm.

The Overall Design Of The Spy Camera 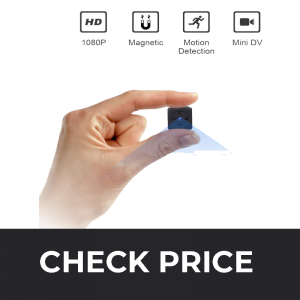 By now, you already want to know some of the qualities that cause it to create a buzz among so many users.

Let us start with its size: I believe it measures 0.87 inches by 0.7 Oz. That is the best size to hide under your shirt, and place it on any surface (whether indoors or outdoors) without raising any alarms.

Besides that, it comes with a shield that you place in front of the lens to increase discretion. You will have to charge it for at least two hours, where it could also be recording even at this time.

At the back of the unit, you will find a magnetic block. Its role is to enable the user to stick it on any surface without it falling off. The manufacturer provides a magnetic tape to enforce the magnetic on a non-magnetic surface.

As many spy cameras record at all times, this one is different. It is always alert to detect any motion through its in-built motion detectors. If it captures anyone, it starts recording, and adding on that; it captures snapshots.

The camera offers high quality videos of up to 1080p. On a full charge, the device can record up to 54 minutes of action as it stores in its inbuilt t-flash.

Note, recordings, which in this case are loop recording, will overwrite on older unuseful videos.

When it comes to extracting videos, you can remove the T-flash or use the USB cable to view the recordings on your computer. Its viewing range is within 70 degrees; so, choose the location wisely.

The NIYPS Mini Spy Hidden Camera brings home the ultimate security anyone would want. I mean, you could place it anywhere in the house, or outdoors. Besides that, you can carry it anywhere.

It would be a reliable tool for an investigative journalist, private investigator, or police officer.  By the way, due to its small size, you are sure that it will not attract any attention or even cause any distraction, especially when taking snapshots.

Why Should I Buy It?

It comes with various options of wearing it including placing it in your pocket. However, I would not recommend this camera for people who want to live streaming security features. You will have to leave it one location and extract the videos once it picks the needed evidence at the end of the day.

To get more information about the NIYPS Mini Spy Hidden Camera, here is a video to watch. Link: https://www.youtube.com/watch?v=lCll8dZjX2g

The spy camera is best for people who want to protect their properties and to keep watch of their loved ones.

Besides, it is also suitable for people who want to obtain some form of evidence, especially for investigative personnel. Note, nevertheless, it is a worthy investment for any person who wants to upgrade his or her home security.