We live in an age wherein setting up home surveillance is incredibly easy. All you have to do is go to Amazon and you’ll find a vast range of options in terms of spy cameras. You can find hidden spy cameras disguised as ordinary objects like pens, smoke detectors, picture frames, etc. And you can even find portable or wearable spy cameras in the form of spy glasses, hats, shirt buttons, etc.

If you set up a surveillance system in your home, you’re always protected. In case there’s a break in, you can catch all of the intruder’s activities on a screen to show the authorities later. And if your hidden camera has a motion detection feature, you can even be warned about a break in so you can protect your family in time.

All hidden cameras are different. Some of them are concealed in different forms, some have a different set of features, and some have different levels of clarity.

Over the past couple of weeks, our team has tested and examined hundreds of the best hidden spy cameras in the market to create this definitive list of the 10 best spy cameras for Home and Office use. We’ve even consulted established security firms for their recommendations. And we also conclude a buyer’s guide in the last part of this article. We hope our test, experience, and research can help you select a best hidden camera. 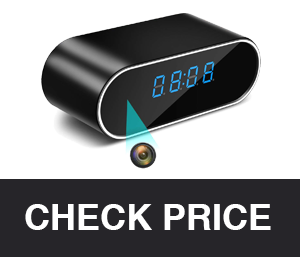 The MCSTREE Hidden Camera in Clock is the best hidden camera clock in the market. There are a lot of benefits of using an alarm clock as a hidden spy camera. You can place it beside the bed or on a shelf in a position that it gets a complete view of the entire room. As such, if there’s some intruder, the alarm clock camera will see everything they do.

The MCSTREE Hidden Camera in Clock is an especially stellar camera clock with a great set of features. You can access the functions of the alarm clock camera, such as the USB port, memory card slot, etc, from the back of the clock. This hidden camera is entirely wireless and it comes with a mobile app you can use to control it.

It was also featured as the Editor’s Pick in our list of Best Alarm Clock Spy Cameras.

The MCSTREE Hidden Camera in Clock is an extremely advanced hidden spy camera with a wide range of features. It’s made by a company that’s extremely reputable and this product has a high number of positive reviews from customers. The fact that it can be remotely controlled via the mobile app is just the perfect addition to its already powerful set of features. 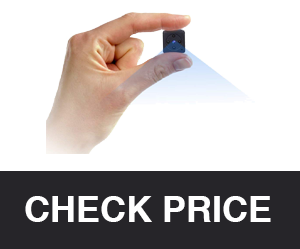 The NIYPS Mini Spy Hidden Camera features in #2 on this list because it’s a miniature hidden camera that’s extremely discreet and highly versatile in application. It’s a 1 cubic inch black metallic dice that weighs just about 3 ounces. As such, you can carry it anywhere and discreetly install it in anyone’s home or office.

This hidden camera has a magnetic body so it can be attached to any metallic object such as a table, pipeline, pole, power socket, etc. It also comes with a mounting device. Because of its small size, it goes largely unnoticed by most people.

It was also featured in our list of the Best Mini Spy Cameras for Bathrooms.

The reason I love the NIYPS Mini Spy Hidden Camera so much is because of how convenient it is. You can simply slip it into your pocket, carry it wherever you want, and discreetly attach it to anything metallic without anyone finding out. But it doesn’t just serve discretion, it also has some great features like Motion Detection, Night Vision, etc. Basically, it’s the ultimate spy camera! 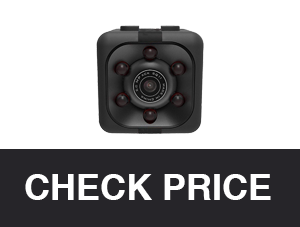 The Rozetka Tech Hidden Camera is one of the cheapest spy cameras in the market. It also happens to be one of the smallest, weighing just 0.8 ounces.

It looks just like the NIYPS Mini Spy Hidden Camera and is also a 1 cubic inch black magnetic disc that has versatile application. It can be easily attached to any metallic objects like light fixtures, poles, etc, or you can slip it into narrow spaces like the gap between cushions or within lamp shades.

This spy camera was also featured in our list of Best Motion Activated Spy Cameras.

Rozetka Tech Hidden Camera doesn’t have the greatest reviews. However, we’ve still placed it in the #3 position because it’s the cheapest hidden spy camera in the market and thus is accessible to people from all economic backgrounds. Furthermore, it also has a wide range of powerful features that are usually found in much more expensive products. 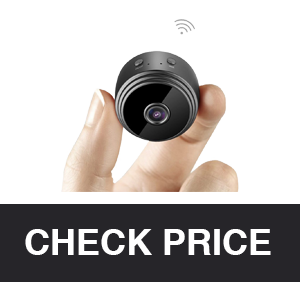 The aobo Mini Spy Camera WiFi Hidden Camera is a powerful and discreet hidden spy camera that can be installed on shelves or walls. Its dimensions are 5.6 x 3.6 x 1.7 inches and it weighs 7 ounces so you can’t carry it around in your pockets.

However, it can be placed ornamentally in your living room and it can hide in plain sight. It has some truly impressive features as well. This spy camera also features in our list of Best Night Vision Spy Cameras. 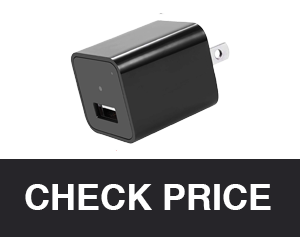 The Duddy-Cam USB Hidden Spy Camera is the best spy camera concealed within an ordinary-looking USB charger. The reason this product has made it to this list is because of how discreet it is.

USB chargers are perhaps one of the most innocuous household products out there. In this case, the charger is made of a simple black color and it has one USB port. The lens is located just above the USB port but it merges with the color of the charger’s body, which makes it completely invisible. You can connect it anywhere that has a good view of the room and monitor your home or office.

This spy camera also featured in our list of Best USB Spy Cameras of 2019. 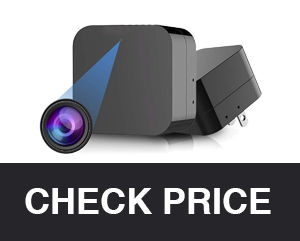 The Spy-See Hidden Spy Camera Wall Charger was featured in our list of the Best Night Vision Spy Cameras because it has incredibly strong infrared lenses that can capture stunning shots in the dark without any graininess.

It looks just like an ordinary wall charger but it can capture sharp images. You should connect it to a socket that would provide it with the best view of the room. 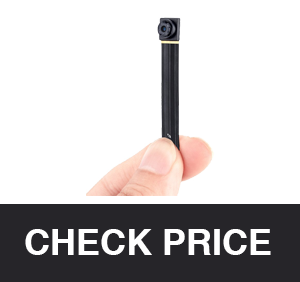 The SOOSPY 1080P Wireless WiFi Mini Camera is an extremely small and discreet spy camera with an advanced set of features. It looks like a tiny lens attached to the end of a holding stick. It can easily be stuck anywhere from pots to sofas and shelves.

This spy camera also comes with a range of different styled lenses resembling a button, a screw head, etc. As such, you can put it on your coat or place it on the wall to disguise it in plain sight. This spy camera also featured in our list of the Best Outdoor Hidden Security Cameras. 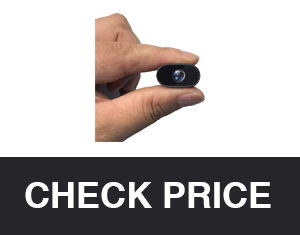 PNZEO W2 Mini Hidden Camera 1080P is a 2.6 x 1 x 0.6 inches tiny WiFi enabled hidden camera that weighs just 0.8 ounces. It’s one of the smallest and most lightweight cameras in the market so it can discreetly be attached anywhere as a spy object.

Installing this camera is extremely easy. After you drop it or attach it in some surveillance vantage point, install the mobile app and start reviewing the live footage. You can use the mobile app to start recording videos, take pictures, engage the motion detection mode, etc.

It records videos in 1080p resolution with a 140-degree wide-angle lens and stores them in a micro SD card that can be as high as 128GB in space. Overall, the SD card can hold up to 4 months of footage. If the space starts running out, Loop Recording ensures that the new footage is written over the oldest ones.

The Motion Detection feature sends you an alarm notification whenever it’s triggered and also records videos and takes photos that you can view to gain insight into the scene. 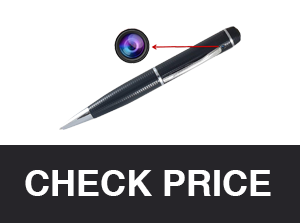 A spy pen is one of the most efficient means of spying on meetings, events, and on other people. You can simply slip it into your coat pocket and then the camera records everything you see or do. You can even gift it to someone so they store it in their office, and this gives you insight into all their activities.

Having said that, the FabQuality Hidden Camera Pen is one of the best spy pens in the market. It was even featured in our list of the Best Spy Pen Cameras & Recorders. It can record 1080p videos at 30 frames per second and take pictures with an 8 megapixel camera.

And FabQuality Hidden Camera Pen has an inbuilt 16GB memory card that can record up to 3 hours of footage. And it has motion detectors so it can start recording videos when some movement is detected. The camera lens is located on the clicker and it starts recording with a single click. 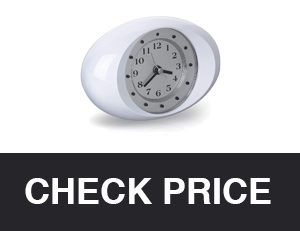 The ESLIBAI Spy Hidden Alarm Clock is an ordinary seeming alarm clock in which the lens is located within one of the numbers. As such, it’s completely discreet. It can record videos in 1080p, 720p, or 640p resolutions. It also has 10 infrared LED lenses that can produce up to 26 feet of visibility in darkness. Other features include Motion Detection, Loop Recording, and the ability to hold 2-way conversations over the intercom.

There are various factors you need to consider before buying a hidden spy camera. In this part of the article, I’ll give you a brief overview of those various factors so you can make an informed decision and buy the correct product.

Hidden cameras are often concealed within ordinary looking objects such as a spy pen, light bulb, shirt button, pinhole, etc. In this article itself, we have come across spy cameras that lie concealed in clocks, pens, etc.

You need to find a spy camera with the best form of concealment. You should also consider where you need the camera installed. For a bathroom, a hook rack camera is ideal because you can attach it at the back of the door and it will look natural. However, if you want to plant an object that can pass notice, you might want to consider a small black dice or button, something small and unobtrusive.

These days most cameras provide HD video recording, either 720p or 1080p. You should ideally look out for a 1080p camera because the bigger the resolution, the clearer the video. And when you’re spying on someone, clarity of details is extremely important.

Getting a spy camera with motion detection is extremely important. With this feature, the camera starts recording whenever there’s motion in the area. As such, you can ensure that you’ll only capture relevant data. This also helps save battery life because it’s not recording all the time.

Finally, you have to take all of the factors into consideration in relation to your specific budgetary limits. Generally speaking, you can find even really cheap spy cameras that will meet all the above requirements, you just have to look for them.

So there you have it! Those were the best hidden spy cameras in the world! As you can see, most of them are fairly reasonable and well within most people’s budgets. You can easily buy them and install them within a few minutes.

All of the products we’ve listed have been thoroughly examined and vetted by surveillance experts so you know you can trust them.

Some people who go through our lists get scared that if surveillance is so easy maybe someone might be spying on them as well. If you have such concerns, you can lay them to rest by also buying a hidden camera detector.

If you have any other questions about spy cameras, feel free to mention them down in the comments section!